Photos and story by Leslie Smith

RISHIKESH, INDIA–
“What’s for lunch today?” I ask Vishal as she hands me a menu. “Everything!” she responds. Vishal is the owner of Ayurpak, a vegetarian restaurant nestled in its own garden in Rishikesh—the yoga capital of India.  “Are you big hungry or small hungry?” she asked, trying to determine how much to feed me. Big hungry, as it turned out. Life in an Indian ashram proved not all that it is cracked up to be—and after five days, I had just escaped. And boy, was I big hungry! 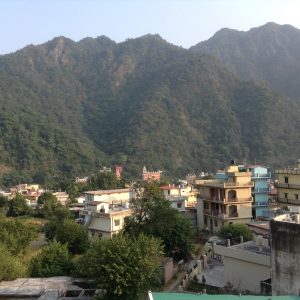 Rishikesh nestled beside the Ganges River

My two weeks in various northern Indian ashrams was shortened by two days when it turned out I was severely allergic to the 125-year-old Phool Chatti Ashram located on the banks of the Ganges, 20 minutes from Rishikesh.  Yoga every day left me sore and my mind puzzled; vegan food and no caffeine until 9 a.m. resulted in a pounding headache. Yet the location  beside the fast-flowing holy water of the Ganges River was breathtaking and the air—at least in the countryside—was as pure as I hoped my soul would become.

The ashram’s once-splendid gardens were destroyed by floods 10 years ago and were being restored, but whole theme of the place—like elsewhere in India—was decay. But resilience and resourcefulness were evident everywhere.  People by the roadside were ready to sell something or to repair it—fresh sugar cane juice, patched car tires, fruits or dung patties for cooking fires.

Phool Chatti Ashram is a typical ashram run for Westerners according to a strict set of rules which Indian ashrams do not observe. Silence is enforced from the 5:30 a.m. wake-up bell until 1 p.m.—but by then I was so overcome with fatigue from chanting cross-legged, anemia from lack of meat, eggs and dairy, and nausea from mould and constant burning of incense in the yoga shala that I had little to say.

Monkeys made daily raids, driving the two musky-smelling German shepherds guarding the place into a frenzy. Scorpions in the hallway and spiders the size of my hand hung from every tree.  Cobra-and-skull motifs of Shiva the Destroyer completed the Haunted House theme.

Statue of Shiva at Parmath Niketan

One day, three wandering sadhus stopped by for a free lunch. These homeless holy men and women renounce conventional life to wander the roads clad in saffron-coloured robes, begging and praying. They can be seen everywhere, carrying only a pail in which to put their food and a blanket to cover them, depending upon charity to live.

A steep two-storey concrete stairway led to Phool Chatti’s open-air dining room, with marvellous views over the raging Ganges, though the formerly pristine and rocky banks of its beach were being transformed into ghats (steps for bathing in the river) and a crematorium. Tireless workers carried heavy loads of rebar to the riverside, as wave after wave of inflatable rafts carried day-tripping tourists through the rapids.

Most ashrams are pretty basic. Rooms are spartan with a foam mattress on a platform. Meals consist of dal (a lentil broth), rice, chapatis, fruit and a vegetable dish as well as gallons of  tea.  Depending upon where you stay, the washroom may  have enough water pressure to power the shower; otherwise, it’s an Indian-style bath in a plastic bucket.

The ashram day begins early—around 5:30 or 6 a.m. with guided or unguided meditation for an hour, followed by 1.5-2 hours of  yoga and a nasal-cleaning ritual using a neti pot full of hot water. Breakfast is at 9 a.m. followed by karma yoga—a period selfless service to the ashram such as cleaning chores. A hike, study time or satsang (a question and answer period with the resident guru) happens before lunch, the main meal of the day. Students eat off tin plates, and drink from tin cups, which they wash, dry and put back on the shelf after every meal. Afternoons are for personal chores such as laundry, naps or more study. A second 1-2 hour yoga session takes place in late afternoon, followed by meditation, then fire puja or aarti, two linked Hindu ceremonies of gratitude meant to drive out darkness.  After evening kirtan (chanting and playing sacred music) and another  meditation students tumble into bed.

Though I followed variations of this schedule for several days sneezing, headaches, dizziness and nausea soon plagued me whenever I entered the yoga shala —a space I was supposed to occupy 6-8 hours daily. Finally, I could take it no longer. My escape from the ashram took place at midday; I departed by taxi for Rishikesh to the comparative luxury of the Dewa Hotel. A real bed, sumptuous buffet breakfast, swimming pool and heavenly view of the Ganges awaited. 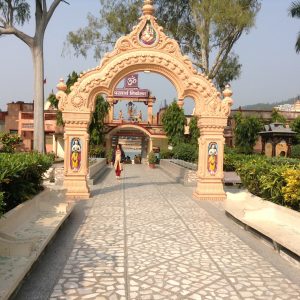 For two days, I patrolled Rishikesh, visiting the sites and stuffing myself with tasty food. Laxsman Jhula footbridge, built in the 1930s, is packed with pedestrians, scooters, monkeys and even Brahma bulls. Across the bridge is Tera Manzil, a 13-storey Hindu temple. Each level is packed with shrines to gods and goddesses, souvenir shops selling icons, alcoves housing astrologers and priests. Kirtan is sung in the evening beside the Ganges and pilgrims float ganga aarti—candles burning in paper bowls with flowers—as a blessing.

At Rishikesh’s tidy Anand Prakesh Ashram the daily routine was  relaxed. Yogrishi Vishvketu, its founder, was friendly and hip. We visited briefly before he hopped a flight to Beijing to lead two yoga classes, then fly back to India. Vishvi-ji summers in Canada giving classes and workshops.

The Truth About Ashrams

I discovered the truth about ashrams at Parmath Niketan Ashram, across the Ganges from Rishikesh. Inside, I freely wandered the luxurious grounds, studded with statues of Hindu gods and goddesses. At the reception desk I met Indu, who told me that for a $40 CDN daily donation I was very welcome to a room overlooking the Ganges. The price included three daily meals plus snacks in a very nice dining hall with granite-topped tables, comfy chairs and not a tin plate in site; two hours of yoga per day; 15 minutes of meditation; 30 minutes of aarti/fire puja; an hour of satsang; plus lots of free time to wander the grounds, bathe in the Ganges, chat and enjoy the lively streets of Rishi. She smiled when I explained the daily routine at the Western ashrams I had been staying at. My tales of endless routines, silence and deprivation seemed foreign to her.  Would I like to book in now, she asked, so I could experience a real Indian ashram? I reluctantly declined her offer. 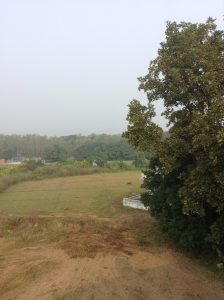 Next stop was Auro Valley Ashram near Haridwar, founded by Swami Brahmdev in 1985 in memory of The Mother and Sri Aurobindo. The two venerated yogic philosophers lived and worked for many decades in Pondicherry. Swami Brahmdev has a large following in South America and Russia, and though the ashram was mostly deserted when I arrived, its stunning circular, marble-capped buildings and gardens conveyed a sense of peacefulness. Located just outside the southern edge of the Rajaji Tiger Preserve, the immaculate grounds occasionally experienced intrusions from elephants, deer, peacocks and even the odd tiger.  Wildlife and farm animals could be glimpsed from the rooftop terrace of the egg-shaped dormitory building, where a giant painting of The Mother’s eyes watched over guests.

The circular library hosted morning satsang with Swami Brahmdev while evening meditation took place in a special meditation hall with a glowing green and crystal sculpture at its centre. In another marbled yoga hall, Shri Yogi Sachidanandaji taught us that all life is yoga, and that yoga is the basis of  love. That night, I fell asleep listening to the catcalls of wild peacocks. An elephant trumpeted somewhere near the banks of the Ganges, and I dreamed of a warm, green glow. 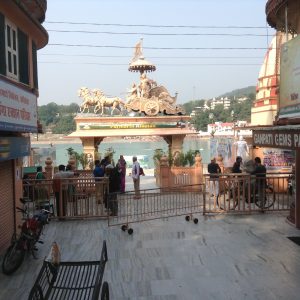 Road to the Ganges

Ashrams have different schedules and philosophies so try to find one that suits your goals before leaving home. Yoga is viewed differently in India than in Canada; be aware of what style of yoga you will be practising. Ask how many meals are included, what type of accommodation is available and what the daily routine is; silence for half the day is not to everyone’s taste. Ashrams are generally reasonably priced though guests are expected to pitch in for 30-60 minutes of daily chores and wash their own plates.

Outside larger centres not everyone speaks English or any other European languages. India has 13 major languages of its own plus 720 dialects—written in 13 different scripts; even Hindi isn’t universally spoken.

Leslie Smith is an Ottawa-area freelance writer, beekeeper and organic farmer. Read about her latest exploits down on the farm at www.redhousehoney.ca.